Nathan's Blog
My adventures in electronics, programming, and robotics..

Posted by Nathan House, 14 February 2012 · 3,333 views
I recently purchased a My Weigh iBALANCE 601 precision scale for measurements and parts counting. This scale rocks so hard, I just had to write a short review.!

I bought the scale from Old Will Knott Scales (link above) and am very happy with their service! I asked several pre-sales questions and they were incredibly helpful. Their marketing strategy - being laid back, funny, and just plain nice - works really well, and I will definitely place orders from them in the future if I can.

Here's the item description from the Old Will Knott Scales website:

That's right. My Weigh designed this digital lab scale with two, bright, red, LED weight displays...one on the front, and one on the back. So whether you load the scale from the front or the back, you won't have a problem seeing your weights.

Does This Thing Count?

You bet it does! All ya need to do is weigh a sample amount of pieces, so the scale can know how much each piece weighs, then start counting. This is a great feature if ya want to use this as a jewelry scale for weighing gems and jewels...you'll be finished counting in no time.

This digital laboratory scale has a fancy backlit display to help ya see your weight readings, even in dim lighting.

When you're weighing with high precision scales like this one, even the tiniest breeze can interfere with weight readings. This My Weigh scale comes with a durable windscreen to keep out those pesky drafts. Oh, and don't worry, this scale makes it easy to put your items on, or take them off, the platform. The windscreen lifts right off.

The i-601 has a durable stainless steel weighing platform to make cleanup a breeze. Unlike gold or silver, stainless steel doesn't scratch easily and keeps its shine without rusting or tarnishing.

To make sure ya keep getting the best weight readings from your precision balance, it helps to calibrate it from time to time. This precision balance has instructions to make calibrating your scale easy.
You'll just need to pick up a 500 gram calibration weight to get the job done.

The tare button on the front of this digital scale can be pressed to "zero out" the weight on the scale. You can then add more weight, and the display will only show the weight of the items you're adding. This sure is useful when ya want to use an expansion scoop to weigh your things, or if ya want to get separate weights of multiple items.

This very handy feature helps you quickly and easily get your scale nice and level. A level scale is important for getting the most accurate weight readings.

If ya have a problem with this digital scale, just send it to My Weigh's warranty center in Phoenix, Arizona. They'll fix it or replace it, and send it on its way back to ya within two working days.

The scale was shipped the same day I ordered and arrived fairly quickly. It came well packaged: 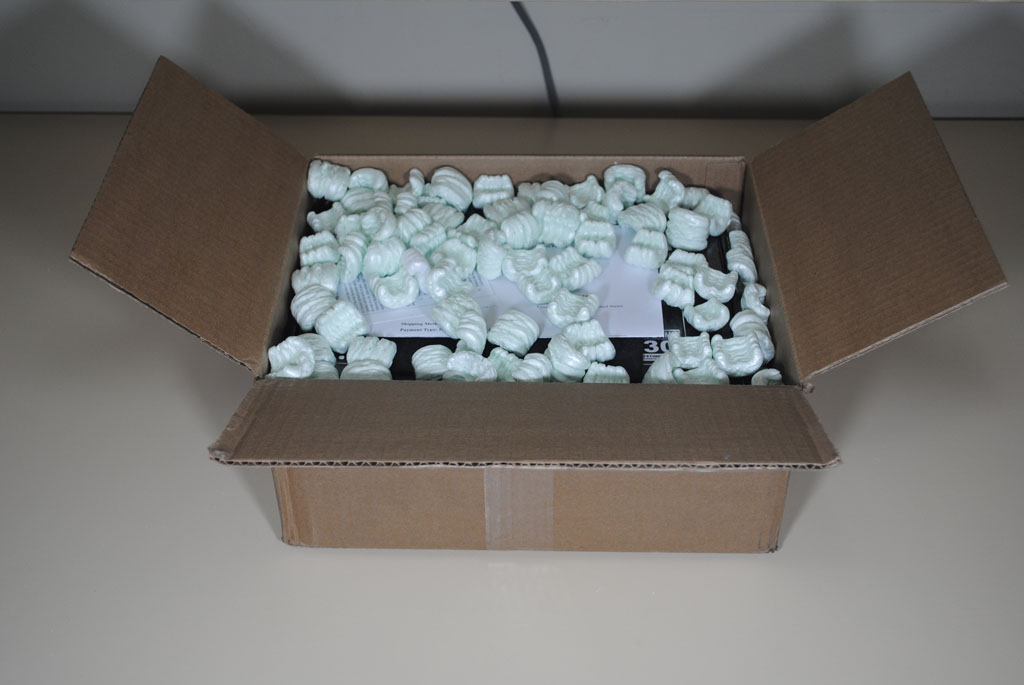 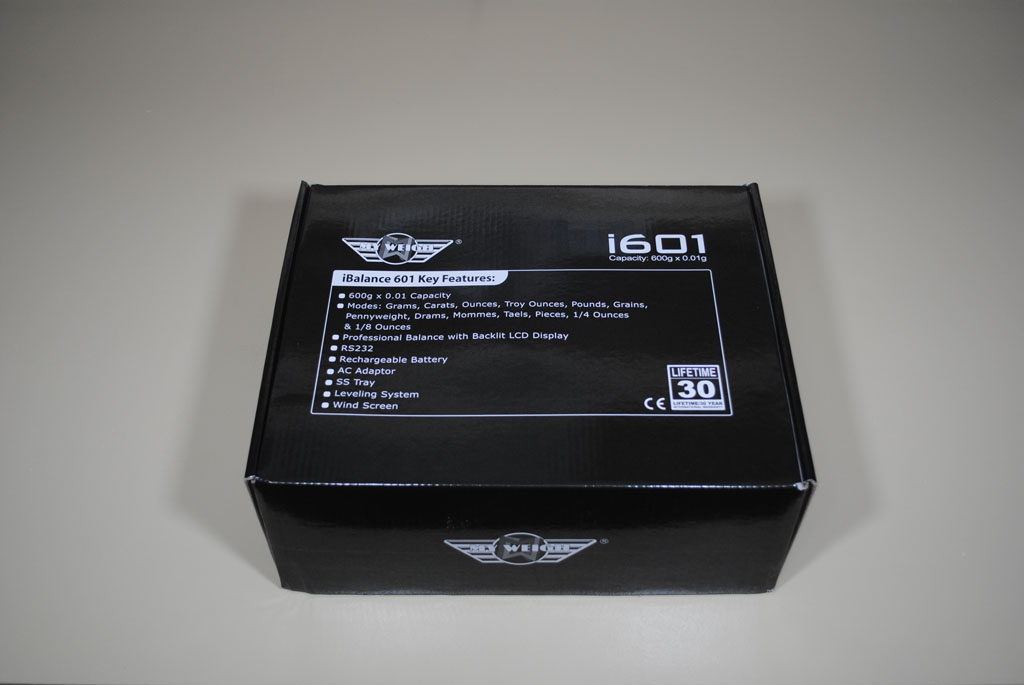 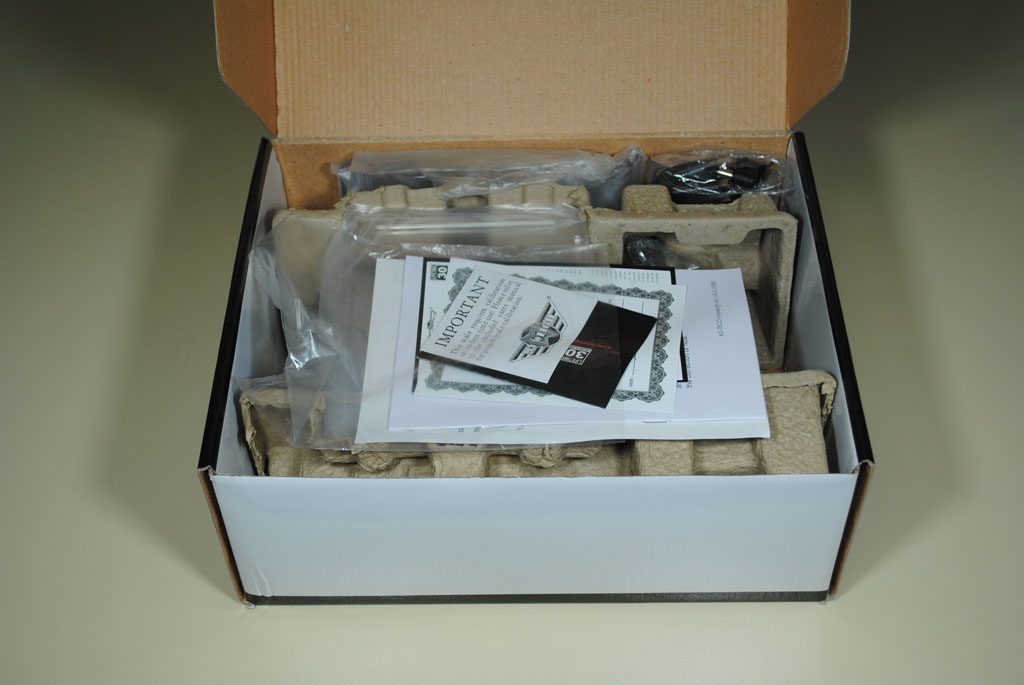 After unboxing it all of the accessories can be seen: 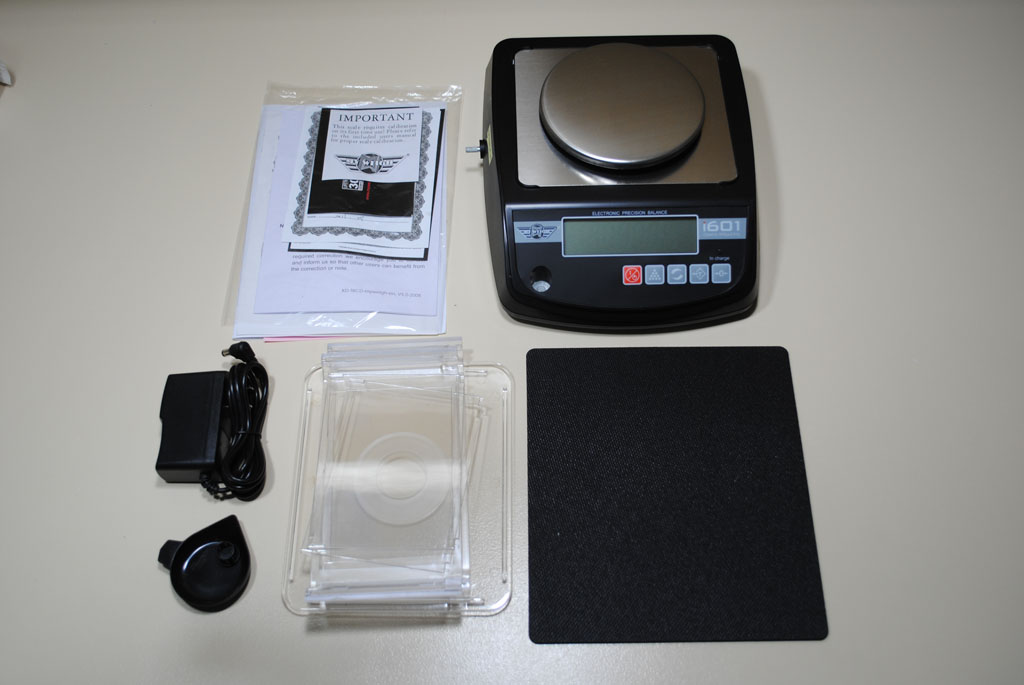 Below the scale and manual are the power cable, a little cup for holding something, a windscreen, and an anti-vibration mat.

Here is the scale with the windscreen put together: 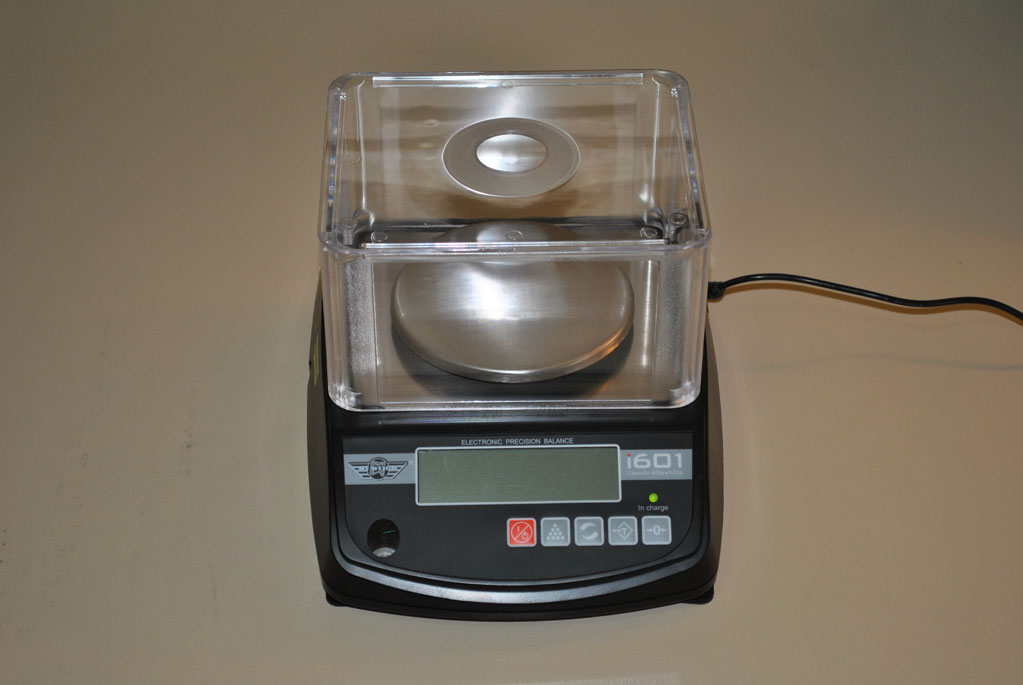 I don't know if it's really necessary to use the windscreen and anti-vibration mat, but it's nice that they were included. The windscreen does seem a little flimsy, however, as the pieces just slide together.

There's a level in the front left corner, and are adjustable feet on the bottom in all four corners: 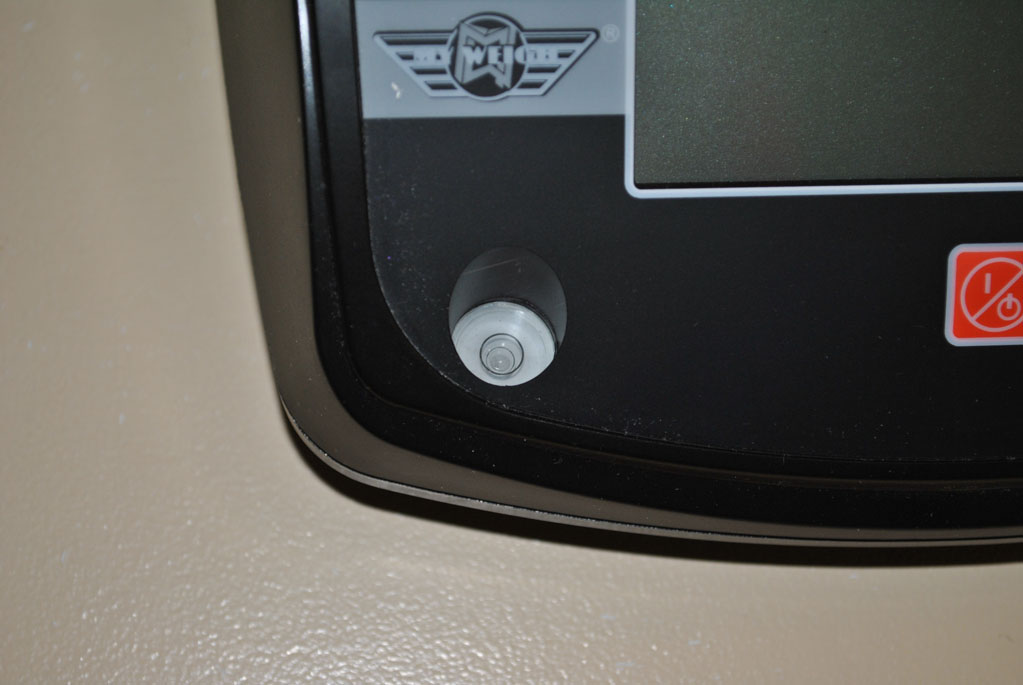 I have it leveled pretty well in the above picture and you can see the bubble in the middle of the circle.

A scale this precise needs to calibrated on a regular basis.To calibrate the scale, hold down the "0" button and then turn on the scale. Continue holding the button down while the scale does it's self calibration thing (it counts down from 9 to 0) and then makes a really annoying beeping sound, after which the scale tells you to place zero grams on it (i.e. nothing) and then 500 grams (a 500 gram calibration weight is needed for this. The cheapest one I could find was on Amazon, here). After this, the scale is calibrated. A short while after calibrating, I put the 500 gram weight back on and the display read "499.99 g". 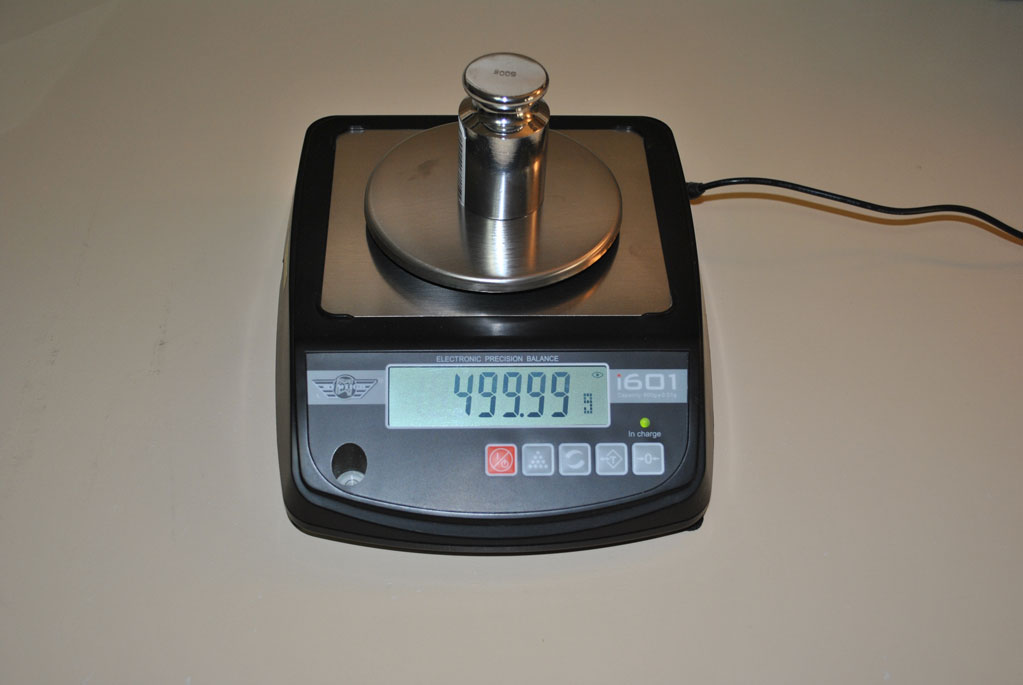 Probably the biggest reason I purchased the scale is parts counting, and this is something that the i601 excels at! To put the scale into parts counting mode, hit the second button from the left.The scale asks you to put 10 pcs on it: 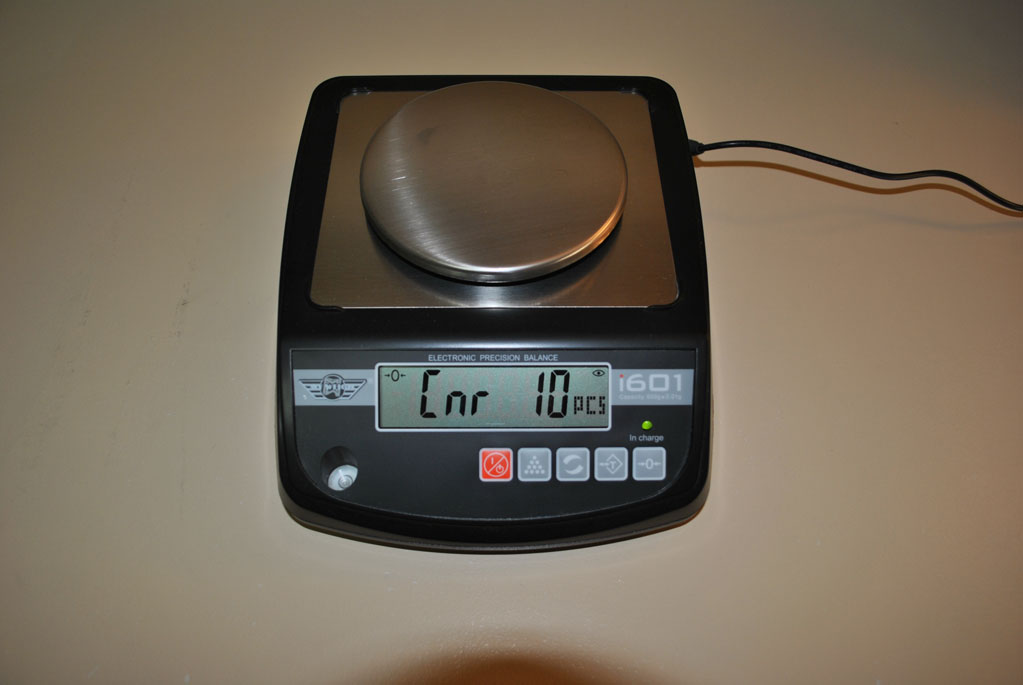 After putting the pieces on the scale, hit the button again, and the scale is now in parts counting mode! 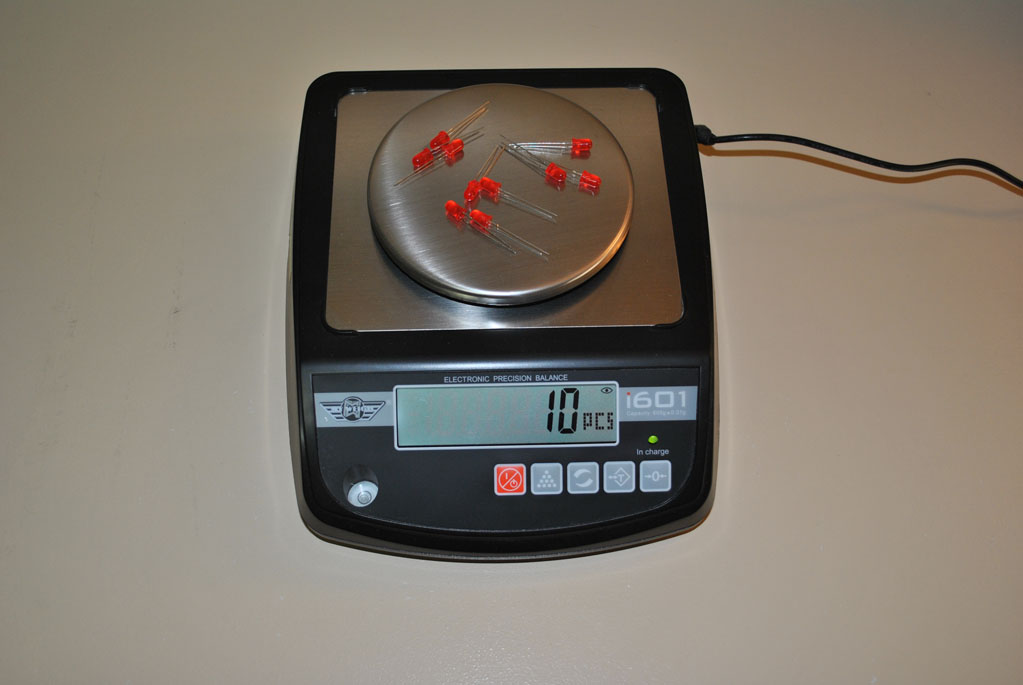 Parts can now be added or removed at will and the scale update the count. I grabbed a handful of LEDs and dropped them on: 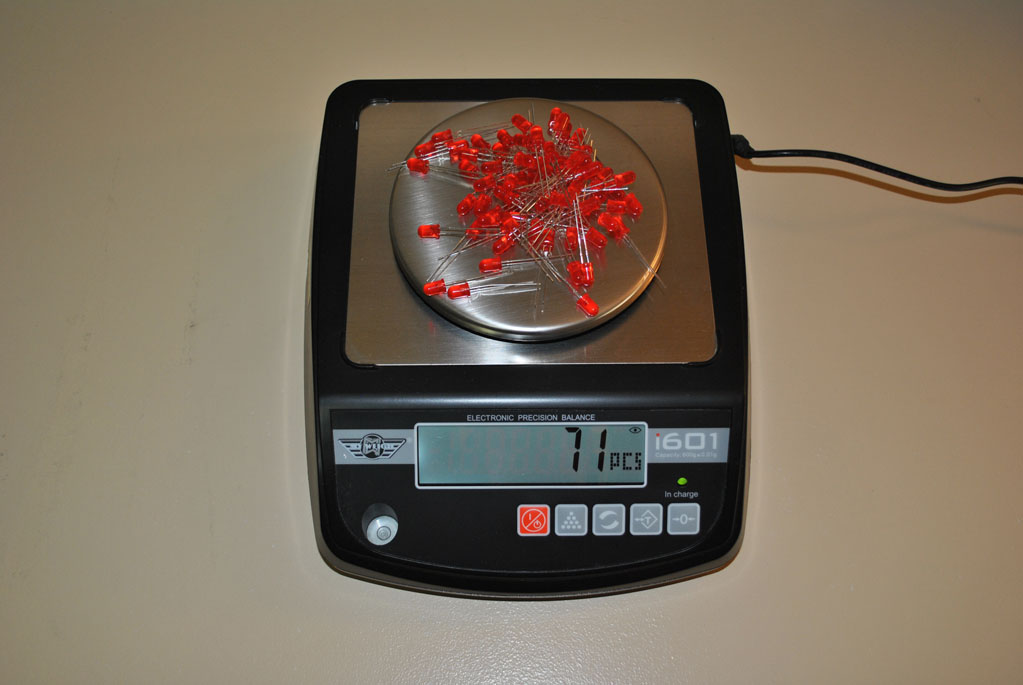 I tried adding and removing single LEDs and the scale took it all in stride, never making an error! It's amazing to me that this thing can accurately measure the weights of these small, lightweight LEDs.

The "tare" feature on the scale is also is also extremely useful. To tare the scale, remove whatever is on it and then place a container/box/whatever on it: 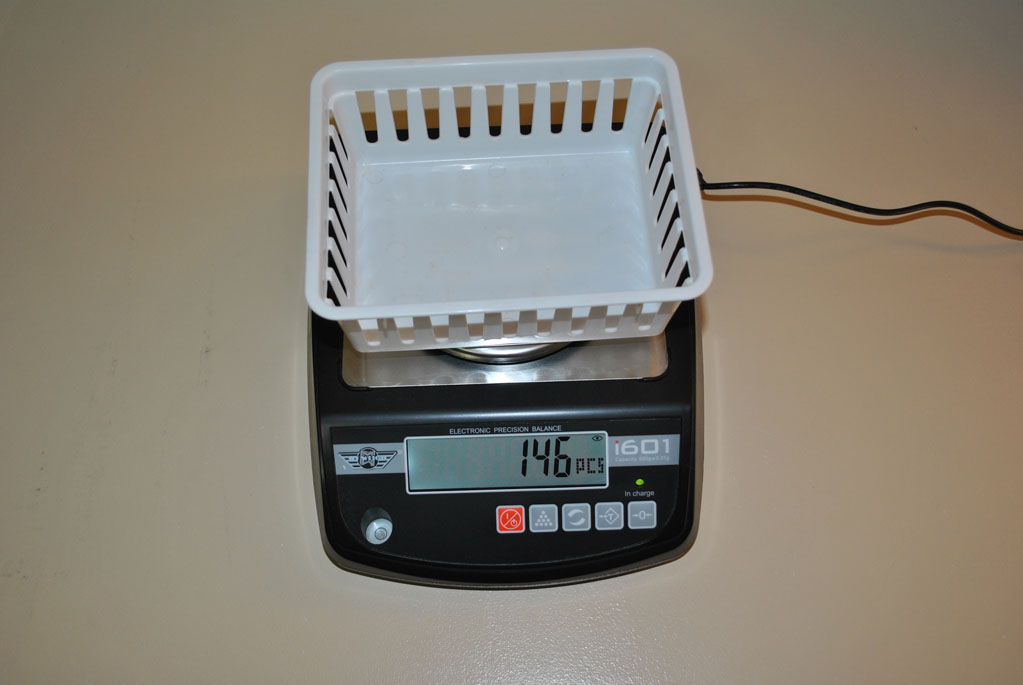 Obviously there aren't any LEDs on the scale, but the scale doesn't know I placed a container on it, so I need to tell it that. Go back to the weighing mode by pressing the parts counting button again: 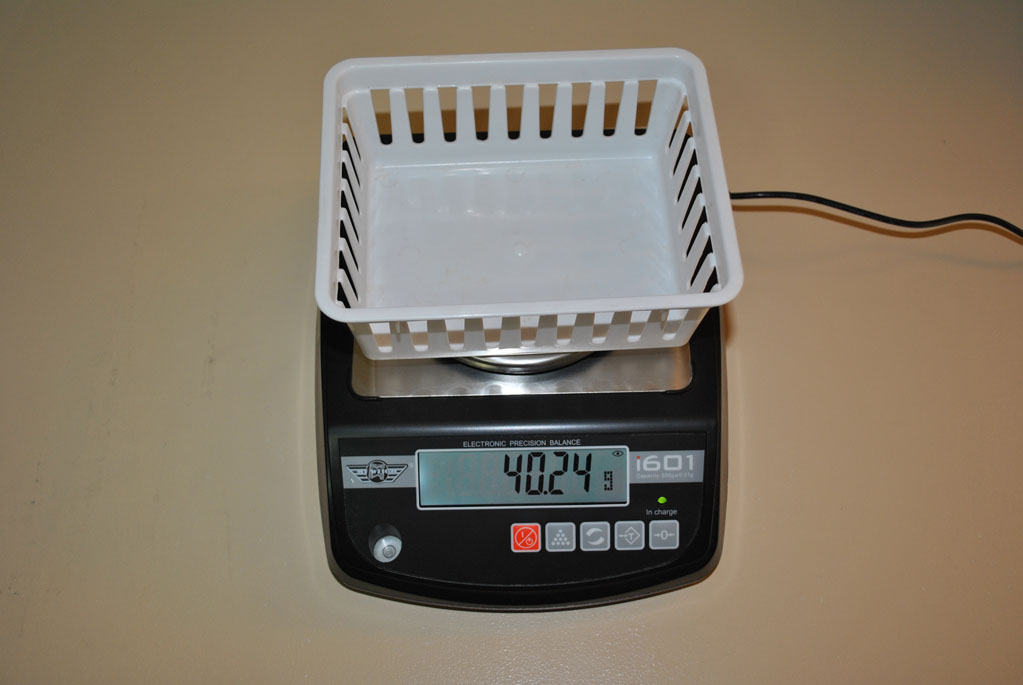 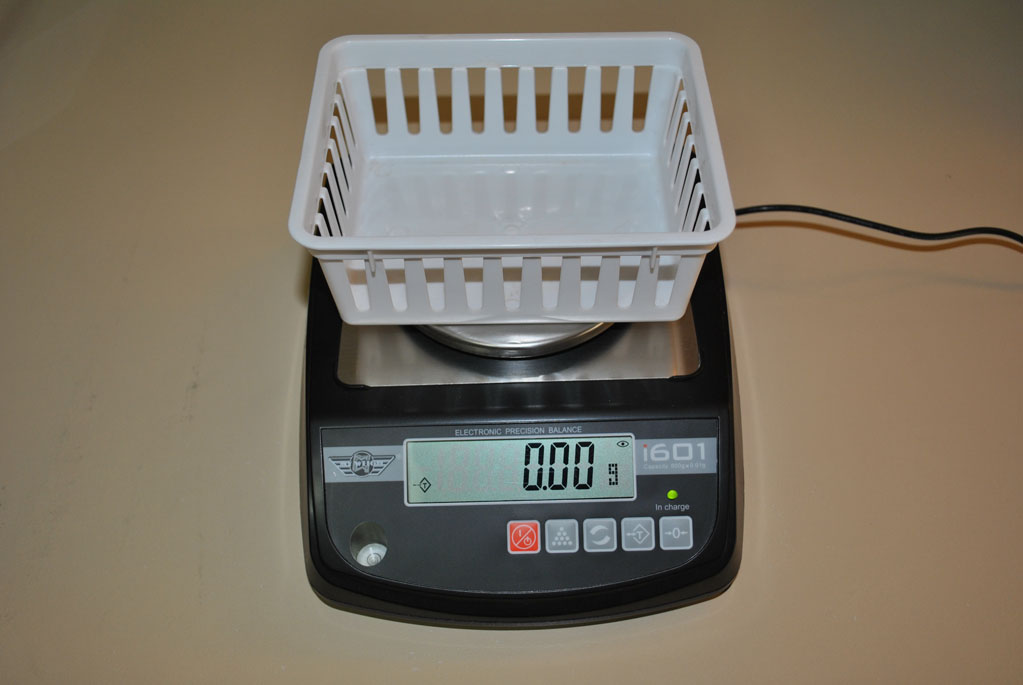 I put all the LEDs from before back on: 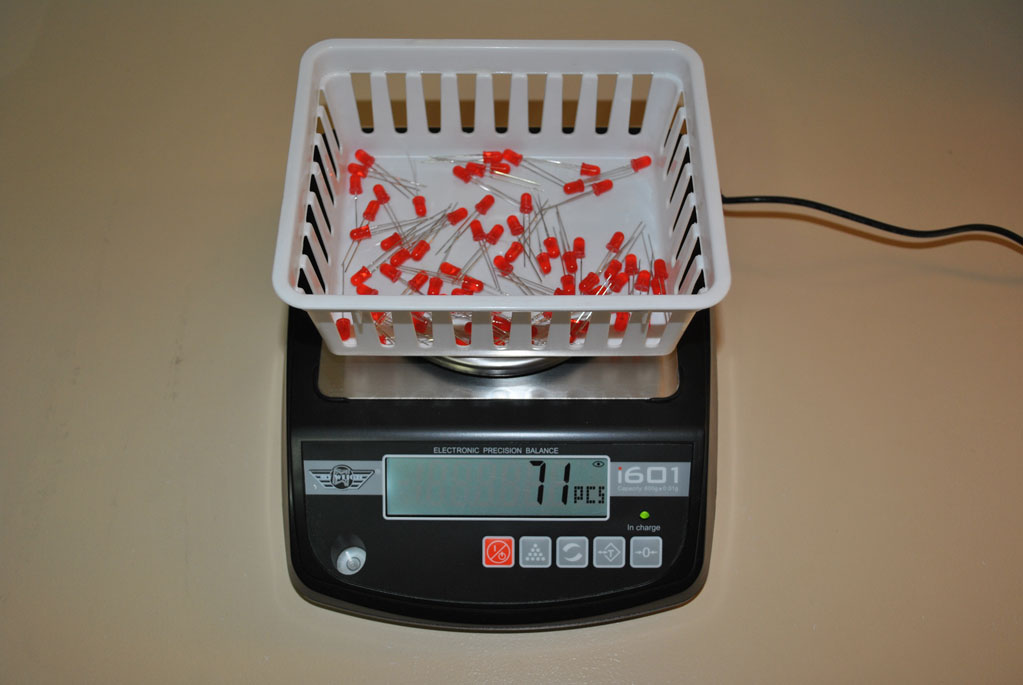 Lo and behold, it's the same! 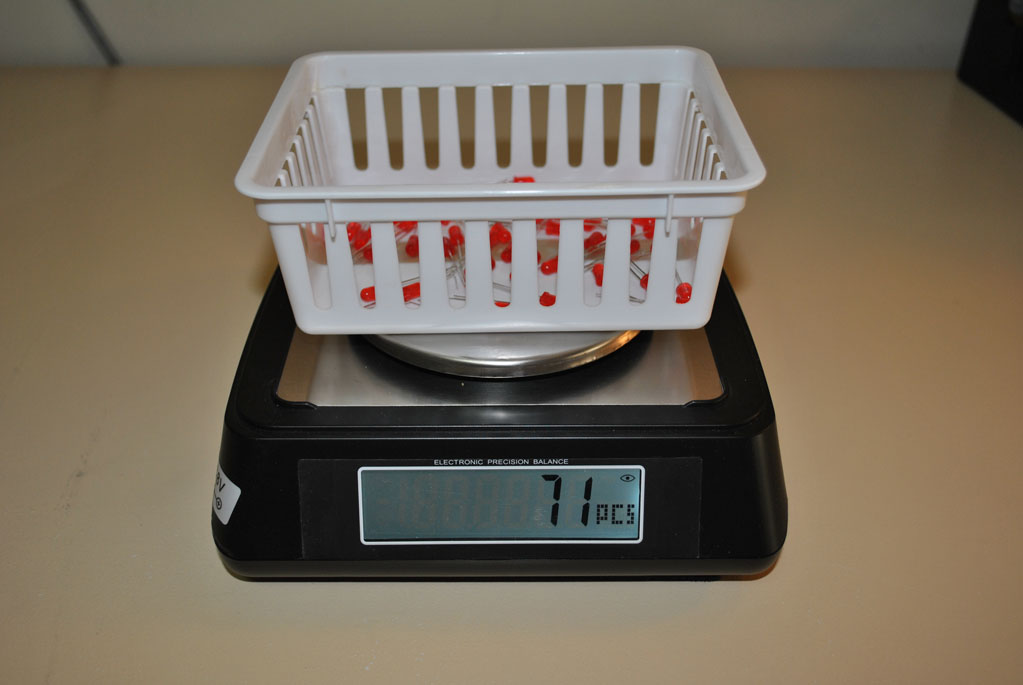 There's a DB9 connector on the side, right next to the power jack: 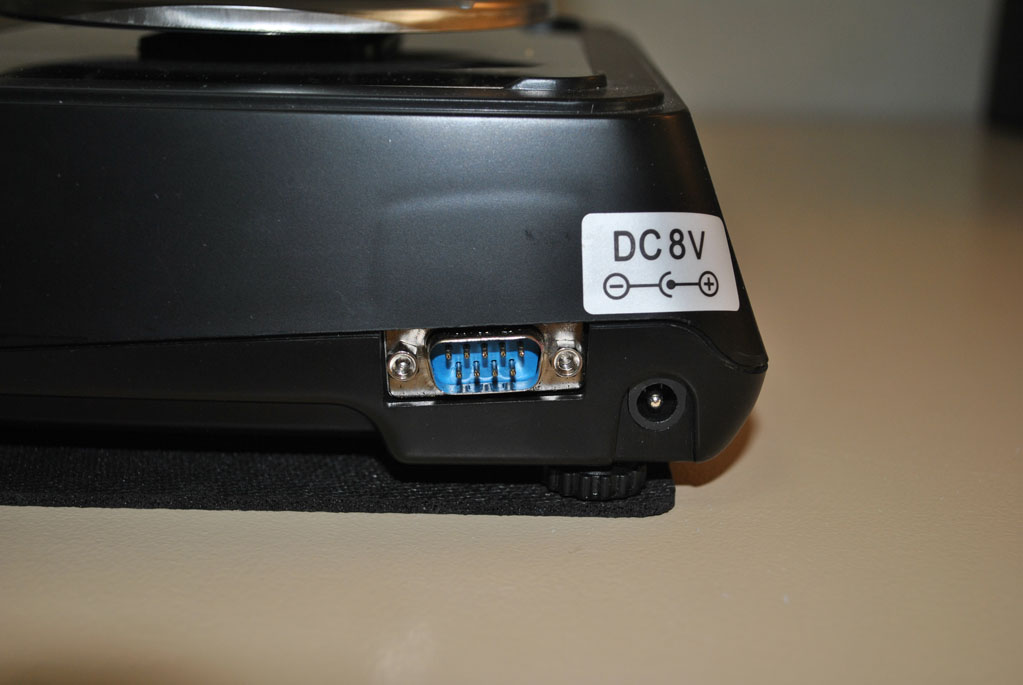 Hmm... What could that be for? I tried connecting it to my computer over a USB to RS232 adapter but didn't get anything from it. I will have to explore this more in the future.

Something I wasn't expecting when I purchased this scale was the large battery in it, which lasts a long time! 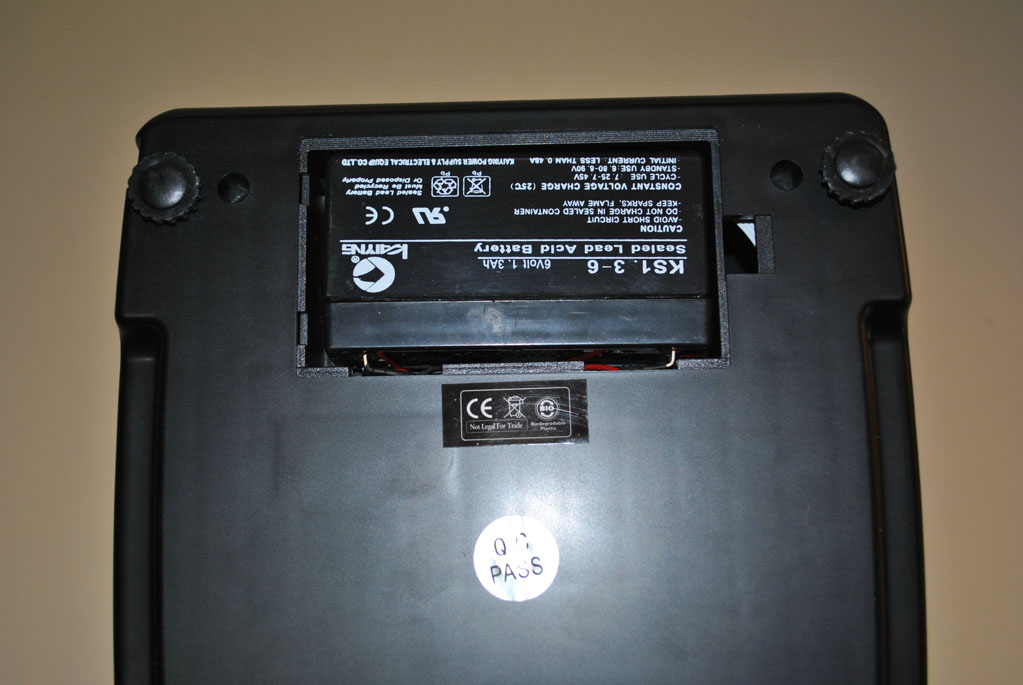 I removed a panel on the bottom of the scale and you can see the large battery in the above picture.

Overall I'm very happy with this scale! While it's not cheap, I really can't think of anything I don't like about it, and I plan on getting a lot of use out of this thing!